Jun 15 Comments Off on Carbonated Beverages Are Bubble Trouble 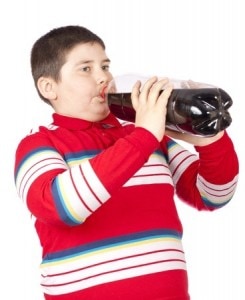 The single biggest source of calories [7%] in the American diet is from carbonated soft drinks. A carbonated beverage is one that releases carbon dioxide in normal atmospheric pressure. Artificial carbonation was first introduced in 1767 and after 1830, the sweetened and flavored lemon-lime, grape and orange carbonated drinks became very popular. Today, heavily sweetened, carbonated drinks or sodas are among the most popular beverages in the world. Consumption of carbonated soft drinks peaked in 1998 when consumption was 56.1 gallons per person per year. Soft drinks provide large amounts of sugar [mostly high-fructose corn syrup] to many individual’s diets. The empty calories of soft drinks contribute to health problems, particularly obesity and tooth decay [caries]. A study from Harvard shows that soft drinks may be responsible for the doubling of obesity in children over the last 15 years.

Carbonated soft drinks not only have a high sugar content that contributes to tooth decay but also have a very acidic pH that can erode tooth enamel. Some of these drinks, especially the colas have as much caffeine as a cup of coffee and can disrupt children’s or adult’s sleep and leave them feeling tired during the day.

These carbonated soft drinks are also related to gastric distension, which can trigger reflux. Studies show the consumption of one can of soda a day corresponds to 53.5 minutes of elevated acid levels in the stomach.

The best approach is to cut down or avoid carbonated drinks. Many schools have removed the soft drink vending machines in their halls and cafeterias. If not, it’s best to drink through a straw so the soda is swallowed from the back of the mouth and does not come in contact with the teeth causing decay. Substitute other beverages such as water and more nutritious beverages like milk and juices.